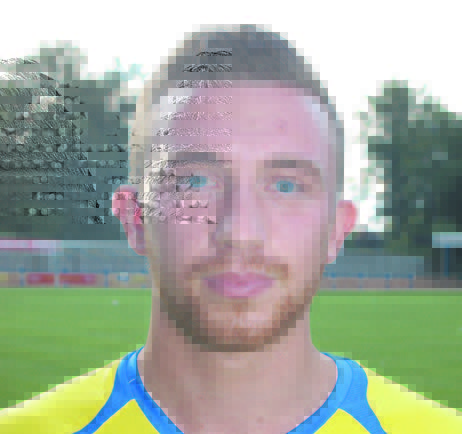 FOOTBALL: King’s Lynn Town picked up a point in their 1-1 home draw with Grantham Town on Tuesday in a proverbial ‘game of two halves’ at The Walks.

The result leaves Lynn in 13th place in the Evo-Stik League North Premier.

Manager Gary Setchell made three changes to the team that lost late to Witton on Saturday.

Stephen Spriggs and Sam Mulready came into the Linnets side, as did recent signing from Boston Gary Mills on his home debut. This lasted 35 minutes after a mixture of a hefty challenge and an awkward landing saw Mills withdrawn.

By that time Lynn had taken the lead after a great run and cut-back by Ryan Clarke was thumped home by George Thomson (pictured).

Home keeper Danny Gay produced superb saves from McGhee and Meikle, then Gay denied Greg Smith with his head that resulted in him getting a cut on his head and a bandage applied Terry Butcher-style!

Grantham in the second half got on level terms after a free kick from deep was headed on by Smith and the ball struck the unfortunate Jason Lee and went into the bottom corner of the net.

In injury time, Gary King sprung the offside trap and saw his effort clawed away by the advancing Gay. The follow-up chip from Towey was headed off the line by Thomson.

On Saturday Lynn’s awful away league record at Witton Albion continued as they failed to get a point at their fourth attempt.

With just three minutes to go the only goal of the game came via substitute Shaun Tuck after being denied by Gay.

Ross Watson has left the club in search of regular first team football. Ewan Clarke has been loaned to Wisbech Town for two months.