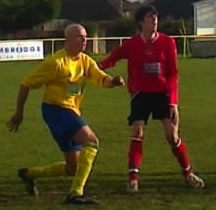 Downham Town’s hopes of climbing the Thurlow Nunn League Division One table were dashed twice in frustrating fashion this week.

At leaders Newmarket on Saturday, Town went down to a single-goal defeat but left with plaudits ringing in their ears after matching the high-flyers for much of the game.

As it was, a fluke goal after 38 minutes sent them to defeat. A deep cross was lost in the sunlight by 16-year-old goalkeeper Luke Pearson and the ball dropped in at the back post.

On Tuesday, Downham had 80 per cent of the play against March Town United but were caught out on the counter attack in heartbreaking fashion.

The hosts trailed 2-0 at half-time but hit back through Luke Plumb and Matt Bussens to level.

They then went all out for a winner as March defended desperately.

But it was the visitors who broke free to grab the decisive strike in the fourth minute of stoppage time, despite appeals for offside.