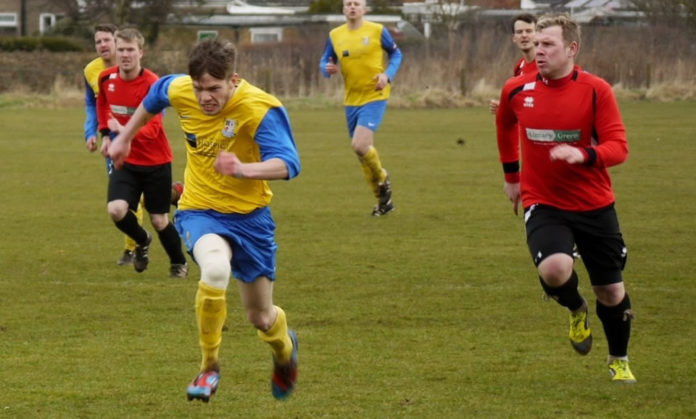 An exciting race for the Anglian Combination title took another twist on Saturday with the top four teams in
opposition.

Dersingham Rovers beat morning leaders Blofield United 3-1 and are now only a point behind
new top team Acle United as the race hots up for the title.

Rovers started off the better side and the early pressure resulted in a goal for Lee Hyde from an indirect free-kick inside the Blofield box. Blofield nearly equalised soon after when the league’s leading scorer Chris Homes shot from 10 yards out but Rovers keeper Matty Hails made a fantastic save to keep them in front at the break.

Chris Maslin should have increased Rovers’ lead but the Blofield keeper made a fine save from point-blank range.

Rovers where reduced to 10 men on the hour when Tim Kirby was dismissed for a reckless challenge, but this did not prevent Rovers increasing their lead when Danny Jezeph dispatched a penalty for his 12th
goal of the season.

Blofield got a goal back from Holmes with a cool finish to leave Rovers facing a nervous last five minutes.

But the points were made safe when Jezeph ran on to a through ball and coolly chipped the keeper from the edge of the box. Man of the match was Trevor Daniels.